What is cryptocurrency and How does it work ? - Hamraoui Tech 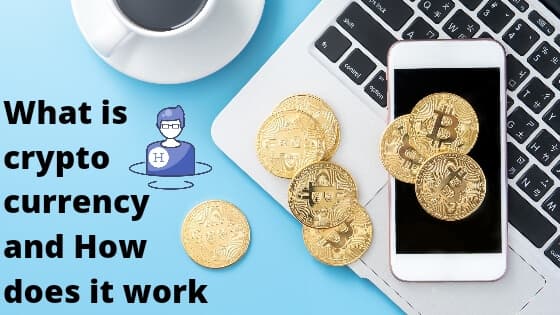 What is cryptocurrency and how it works?

Cryptocurrency is a combination of two words, crypto and currency. Cryptocurrency can be both digital and virtual. The difference is that this coin is based on a cryptographic system like SHA256 or Scrypt. Examples of cryptocurrencies: Bitcoin, Litecoin, Dogecoin and Ethereum.

how can i use cryptocurrency ?

Like any other currency, cryptocurrency can be used to buy and sell things and services online; However, unlike traditional currencies, digital currency are encrypted and use this encryption to enhance the security of online transactions. The biggest concern about these unregulated currencies is trading them for profit, and market speculators sometimes control their prices, as we will see later.

There are many kinds of Cryptocurrency and choosing one of them to invest in is a hard decision. These are the most popular Cryptocurrencies:

Bitcoin (BTC), created in 2009 by someone under the pseudonym Satoshi Nakamoto, is the original cryptocurrency. Like most other cryptocurrencies, BTC operates on a blockchain or ledger that records transactions distributed across a network of thousands of computers. Ledgers must be verified by solving a cryptographic puzzle, a process known as proof of work. Bitcoins are reliably protected from fraudsters. The price of Bitcoin has rose a lot as the name has become a household name. Five years ago, one bitcoin could be bought for about 500 dollars. In August 2021, the price of one bitcoin will exceed 45 thousand dollars.

Ethereum coin (ETH) was launched in August 2015 like Bitcoin, Ethereum is a blockchain-based database system that, unlike Bitcoin, was created with the sole purpose of being an alternative to fiat currency. Ethereum can be used to create various Dapps. From a business perspective, the focus is on Ethereum as it is also seen as a digital currency alternative to traditional currencies. Ethereum was originally valued at around $ 2.8, has been steadily growing since then and is currently trading around $ 650.

Litecoin (LTC) is one of the most well-known cryptocurrencies today, based on an open source peer-to-peer software project. Technically, the Litecoin project is very similar to the Bitcoin system. Version control and conversion of Litecoin is based on an open source cryptographic protocol. There is no centralized management. All transactions, balances and expenses are managed by a network of partners.
Litecoin is issued based on a cryptographic hash function from which blocks are generated. Litecoin can be exchanged for other digital currencies such as bitcoins or regular fiat money, usually through a cryptocurrency exchange.

Litecoin was created by former Google employee Charlie Lee in 2011. This cryptocurrency was created on the basis of the Bitcoin protocol, but it uses a hashing algorithm, it also differs in the amount of capital, encryption, transaction blocking time and a number of other factors. ...

Cardano (ADA) is, according to Investopedia, a cryptocurrency created using an exploratory approach by engineers, mathematicians and crypto experts, and the project was co-founded by Charles Hoskinson, one of the five founding members, the original founder of Ethereum. moved to Ethereum, left and then helped create Cardano) (ADA ) The team behind Cardano built their blockchain through extensive testing and peer-reviewed research and has been dubbed the "Ethereum killer" as they say their blockchain. ... more likely than that. However, Cardano is still in its infancy, and while it performs better than Ethereum in the Proof-of-Stake consensus model, it still has a long way to go in terms of decentralized financial applications. Cardano aims to become a global financial operating system by creating decentralized financial products like Ethereum, as well as providing solutions for interoperating and tracking blockchains, legal contracts and more. , In addition, Cardano's market capitalization will be $ 9.8 billion in January 2021. ADA will trade at $ 0.31.

Dogecoin (DOGE) is a virtual cryptocurrency, it is carried out only in electronic form and cannot be obtained in a tangible way. Dogecoin came about not too long ago when it was first released in 2013 AD as a joke based on the Doge meme by programmer Billy Markus and marketer Jackson Palmer.

Palmer left the project in 2015, but Markus remains its lead developer to this day. Although initially it was just for fun, due to the coin's acceptance, its developers insisted that this coin project be taken seriously.

The coin has a dog symbol in its own form and what sets it apart from other cryptocurrencies on the market is the mining speed it possesses and in 2018 its market value could break the $ 2 billion barrier and is now over $ 6,000 million ...

Actually, although there are other digital currencies in the market with a higher market value than Dogecoin, this currency is very well-known in the digital market and has many followers.

Trading is the exchange of cryptocurrency between people, they can exchange Bitcoin, Litecoin or any other digital currency, and this happens through a platform that acts as an intermediary between them to ensure it's too secure.

Where can I put my cryptocurrency ?

in order to store your cryptocurrencies in a place to save or send them, you can simply create a digital wallet where you can store your cryptocurrencies and withdraw them so that you can use them in real life. In addition, there are many digital wallets such as Coinbase wallet or blockchain wallet, the two most popular wallets, but in the future we will share with you on ouwer Hamraoui Tech website, other wallets with better features as there are digital wallets that double your money automatically and daily.

Where can I trade cryptocurrency ?

There are many digital currency platforms that allow you to buy or trade cryptocurrency and also give you trading opportunities to increase your wealth and increase your capital.

One of the most popular cryptocurrency platforms is Binance. But is this the best platform? Is there a better platform than this one? We will talk about this with you in the future articles.